Discover a choral group that has been performing in the twin tiers for 35 years. 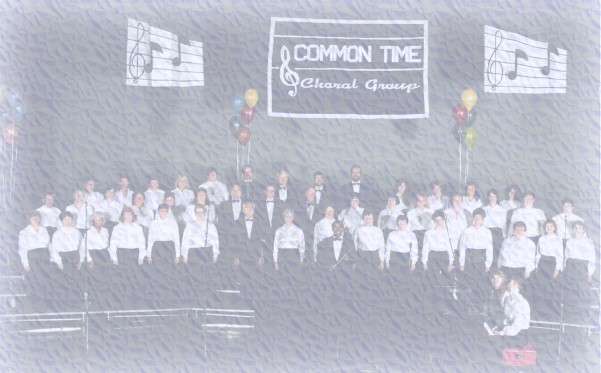 Common Time Choral Group was started in 1985 when Karen Rafferty and a friend were riding in their car listening to the radio. They decided that Elmira and its vicinity needed a choral group to perform popular music. They began organizing it. Paul Holland was contacted to be the director. Rehearsals began in January of 1985 and the first concert was held at EFA in April of '85. The original group consisted of 37 people. The group now averages 70 - 80 singers. Concerts were held in various high schools around the area until November 1987 when they moved to Mandeville Hall in the Clemens Center. In Mandeville, the group's audience quickly outgrew the space. They started to hold a concert on Saturday night and another Sunday afternoon. Concerts were held here until March of 1990 (their 5th anniversary) when they moved into the Powers Theater. This happened because Kenny Rogers needed the space. Common Time was asked by the Clemens Center staff if they would move to the main hall - at the same cost. With great trepidation, they accepted the offer. Could they possibly even begin to fill the hall? House Manager Venetra was certain they could. And they did! Performances have been held there ever since. For most concerts Common Time draws 1000 - 1500 people in the audience. Common Time is a not for profit organization and performs all concerts free of charge as a gift to the community. The group performs 3 major concerts a year. They begin their season with a holiday concert. This is held the Saturday after Thanksgiving each November. The next concert is performed in March. Each year a special theme is featured. They have done country, jazz, Broadway, music from TV, commercials, names, patriotic, and many many more. The upcoming concert will feature all Broadway music which has been performed by the group during the past 20 years. The final concert of the year is the first weekend in June. This will be a potpourri of all types of music. In addition to the full concerts, Common Time performs all the chorus songs in various places in the community. They sing for most of the nursing homes in the area one or more times each year. They have sung for community events such as the Arts in the Park, Corning Summer Song, the Christmas Parade, Corning Museum events, private parties, etc.

Paul Holland has directed Common Time since it began in January of 1985. He came to Elmira from Charleston, West Virginia. He majored in vocal music at Ohio University in Athens, Ohio. He came to Elmira in 1975 and has been actively involved in music ever since. As well as directing Common Time, Paul also directs St. Mary's Folk Group and is music director at North Presbyterian Church. He is not only a director, but also sings, plays and teaches guitar, and arranges music.

New prospective members are invited to audition during the first two rehearsals of each new concert. A simple audition is held with the director. These dates are announced in the program as well as the newspaper. Please contact us if you have any questions regarding joining Common Time.

Concerts are held at the Clemens Center in Elmira New York. Concerts are on Saturday evenings with the PreShow starting at 7:00 PM and Common Time takes the stage at 7:30 PM. There is a concert in March, a concert in May, and start your holiday season off with a holiday concert in November. Check your concert programs and local media for dates.